The Corridor Performance Monitoring System (CPMS) – known formally as the Truck Monitoring System (TMS) - is a custom-developed reporting platform commissioned by the USAID, SSATP, and the World Bank that extracts and transforms large datasets of commercial vehicle GPS data into consistent, reliable and significant corridor performance insights monthly. This project builds on the project experimented in 2013 by Trademark Southern Africa (TMSA), thereafter by the Africa Transport Policy Program (SSATP), and then by the U.S. Agency for International Development (USAID).

The original Truck Monitoring System (TMS) was developed to measure border crossing and route time throughout Eastern and Southern Africa as input into the policy dialogue on improving corridor efficiency, and to monitor the impact of transport and trade facilitation reforms on the logistics industry, as a cost-effective alternative to trucking and border crossing surveys.

Unlike other regions where GPS-based fleet management systems are used by specialized operators (tanker trucking companies or stevedoring companies not engaged in international corridors, for instance), the level of penetration in Eastern and Southern Africa is sufficient to ensure that times measured through positioning data are representative of all companies, not just the performance of top tier operators.

Originally, TradeMark Southern Africa (TMSA) had explored the possibility of using GPS data derived from the fleet management systems operated by trucking companies to measure border crossing time on the North-South Corridor, at Beitbridge (South Africa and Zimbabwe), Chirundu (Zambia and Zimbabwe), and Kasumbalesa (Zambia and DR Congo). The monitoring was discontinued in 2013.

Due to its long interest in promoting corridor transport observatories to support fact-based policy dialogue, SSATP funded the development of the TMS as a pilot that would provide critical data to the Tripartite Regional Economic Communities (RECs)— the Southern African Development Community (SADC), the Common Market for Eastern and Southern Africa (COMESA) and the East African Community (EAC)—and the corridor authorities in the region.

Crickmay, the technical partner operating the TMS, was selected through an open tender, based on the scope and geographic coverage of the fleet providing positioning data. The TMS went live in February 2017 with a broad range of border crossing time and route time indicators, updated monthly. The TMS relies on positioning data from a truck fleet of close to 100,000 units deployed on routes spanning from South Africa to South Sudan, covering 42 borders and routes on all majors Eastern and Southern Africa corridors.

SSATP worked with the Northern Corridor and the Maputo Corridor Logistics Initiative (MCLI) on integrating TMS data into their respective transport observatories while exploring options for the sustainable funding of the TMS. However, after USAID, which took over the funding of the TMS from SSATP, discontinued its support, the TMS stopped publishing indicator updates in February 2019.

Thanks to funding from the World Bank’s Trade and Transport Global Practices and the ongoing support of SATTP, the TMS was revived in May 2021. The backlog of data since February 2019 has been processed to cover the entire period from February 2017 to May 2021, with monthly updates to be released at the beginning of each month. The dashboard below provides a snapshot of the key indicators available in the TMS.

Average speed when moving in km/h

The Corridor Management component focuses on facilitation and transit improvement along corridors,… 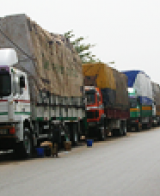